Attendees raised signs for and against the project ahead of council’s votes on Monday. (Photos by Jonathan Spiers)

Three years after the project first came to light, a divided Richmond City Council on Monday effectively killed the $1.5 billion Navy Hill development plan amid calls for a do-over with more public involvement.

After an impromptu public hearing that stretched over two hours, council voted 5-4 to accept the evening’s meeting agenda without the project’s proposed ordinances included, as the same majority had recommended in a committee meeting a week earlier. The move pre-empted a hearing and vote that President Cynthia Newbille had said would occur at council’s next meeting later this month.

Council similarly voted Monday to adopt a resolution asking Mayor Levar Stoney to withdraw the Navy Hill proposal in favor of a new approach to soliciting proposals from developers, with the goal of revitalizing the area that includes the shuttered Richmond Coliseum and other underutilized city-owned land nearby. 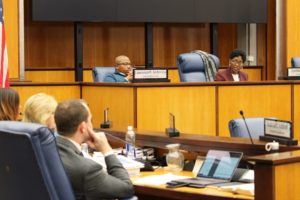 “Tonight is not about saying no; it is about saying yes to a pathway forward that a majority of our citizens has said they want,” said Stephanie Lynch, who made up the majority along with fellow council members Kimberly Gray, Vice President Chris Hilbert, Kristen Larson and Reva Trammel.

Newbille voted the other side along with Andreas Addison, Michael Jones and Ellen Robertson.

In a statement issued shortly after the vote, Navy Hill developer NH District Corp. stood behind the project and process, maintaining it had listened to and responded to the community’s concerns.

“While we are disappointed that five City Council members rejected the project, we are proud of the proposal that we delivered,” the statement said.

“We were actively working on amendments to incorporate the suggestions we heard, but unfortunately, those who opposed the project voted to end it before learning more – which is regrettable,” the group said, adding later: “…this was a missed opportunity to address many of the issues we have heard about through countless hours of community engagement.”

Council members contended the length of time and complexity of the project had played the process out. Stating it had been said to her that council’s job was to work out a deal, Larson said in her remarks, “I feel like our No. 1 job is to represent the people.”

“I have personally spent time on this for the last six months. I think it doesn’t matter if you’re for or against this process, I think we are all worn out,” Larson said.

Newbille took exception to that position, maintaining that more work could be done before council’s next meeting in two weeks.

“Tired is not a sufficient response,” Newbille said. “Our city and our citizens deserve our due diligence on any project before us to fully vet it. Not to try is not acceptable, and tired is not a good enough reason for any of us.” 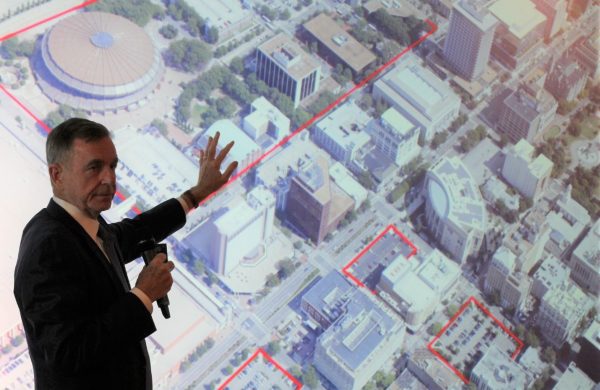 The votes put an end to a years-long effort that came to light in mid-2017, when BizSense first reported that a group of local business heavyweights led by Dominion Energy CEO Tom Farrell was backing a plan to redevelop the aging coliseum as part of a larger mixed-use development.

Stoney threw his support behind the plan a year later, after issuing a formal request for proposals that attracted a sole response – from Farrell’s group. After months of negotiations between the city and NHDC, Stoney formally endorsed the project last fall, sending the negotiated ordinances to council for approval. 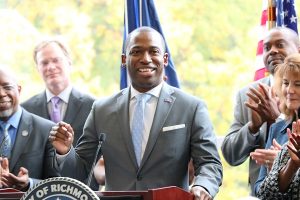 At Monday’s meeting, council members who voted down the ordinances described that process as keeping the public in the dark for most of it. Their request sent to Stoney on Monday is intended to ensure a more transparent process from the start, they said.

“I do think there are opportunities here, and we are ready to move forward,” Gray said before the votes. “This process needs to be transparent and involve the people from the beginning…Let’s get more than one proposal on the table.”

The request to Stoney lists several aspects of the project that the patrons took issue with, including a proposed tax-increment financing district that would have pulled incremental real estate tax revenues from parts of downtown to help pay for city-issued bonds that would fund a new arena. The request also calls for development of a plan specific to the area, with input from the public, before soliciting new or amended proposals from developers.

Lynch said the public needs to be able to weigh in on whether it wants a new arena before the city solicits proposals for such a project.

“We have laid out a pathway forward, and that’s what tonight is about,” Lynch said. “It’s not nothing. It’s a reset and an opportunity to bring everyone back together. This has been one of the most divisive projects I’ve seen in this city.” 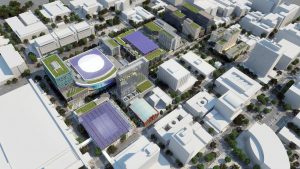 An aerial rendering of the proposed new arena and the surrounding buildings. (Courtesy navyhillrva.com)

The plan called for the arena to be funded using $300 million in bonds that the city would pay over 30 years using real estate tax revenues from new development and increased assessments within the TIF district. The project would be kick-started with $900 million in private investment that was projected to total $1.3 billion upon completion of the project.

The development agreement required NHDC to show the $900 million had been secured before the city can pursue a bond sale to finance the arena, projected to cost $235 million and planned to be the largest in Virginia.

During the public hearing, dozens of speakers spent about an hour per side voicing support or opposition, with many in attendance holding up signs in favor or against the project. The capacity crowd required overflow seating in separate rooms in City Hall.

Among those who spoke in support of Navy Hill was Tricia Dunlap, a local attorney and business owner who said she was surprised by opponents’ “demonization of private enterprise.”

“Those who want a new RFP, you’re not going to get any responses,” she said. “Not after the way the ones here have been treated.”

Another business owner, AJ Brewer of Brewer’s Café in Manchester, noted the amount of private investment the proposal included.

Opponents maintained that the project would cost taxpayers long-term and wouldn’t immediately provide funds for needs such as school improvements, citing earlier remarks about a need for lights for Thomas Jefferson High School’s football field. At the start of the meeting, council had recognized the school’s team for reaching the state championship playoffs last year.

In its statement, NHDC said such needs would have been helped by Navy Hill.

“We remain grateful to the four members of Council who carefully studied the project and collaborated to make it even better,” the group said.