When the Giants play the A’s on March 24 and manager Gabe Kapler wants a relief pitcher, will he be able to signal toward the new bullpens beyond the outfield wall?

Will they be ready?

The Giants say yes. Judging by pictures shot by Michael Short for The Chronicle, there’s lots of work left to do.

“We’re moving along with everything,” Giants executive vice president Alfonso Felder said. “Obviously, a lot happens in the last five or six weeks of a job. We plan to be ready for baseball.”

The bullpens were on the field for the ballbark’s first 20 years, and repositioning them not only makes the field safer — defenders no longer will trip over mounds in pursuit of foul balls — but it changed the dimensions, making the park slightly more hitter friendly.

It’ll be 391 feet to dead center instead of 399, and the wall will be 7 feet high instead of eight to allow fans to view the games from seats behind the bullpens and outfielders to catch more balls heading over the wall. 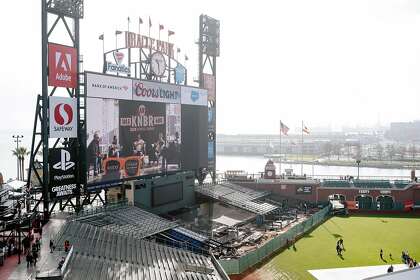 The deepest part of the yard used to be 421 feet to right-center, and now it’ll be 415 feet. The intersection between the left- and center-field wall will be 399 feet instead of 404 feet.

About 650 bleacher seats and about 12 rows in some areas were removed to make the changes possible.

“That can make a difference,” catcher Buster Posey said of the new dimensions, particularly in center field. “We’ll see how many of those balls that are at the wall or the center fielder’s jumping up into the wall, we’ll see if it will change it. I would think it does.” 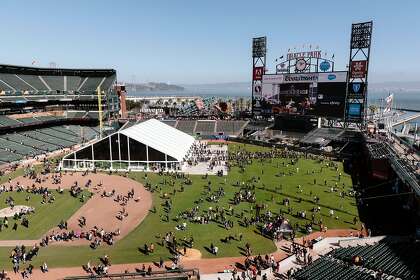 The Giants’ regular-season home opener isn’t until April 3. If all the amenities — heated sitting spaces are planned, for example, as are standing-room terraces making it possible for fans to get direct views of the bullpen — aren’t fully completed for the Giants-A’s exhibition, Felder said, they will be for the Giants-Dodgers opener.

“I can understand how somebody might be concerned,” Felder said. “There’s a short offseason window to get projects done, but there’s a lot that happens in the last few weeks of this job.”