After a yearlong critical needs assessment, a series of community engagement sessions and gathering input from key stakeholders, the Grosse Pointe Public Library officially kicked off Phase 1 building improvements for all three of its branches at a June 30 ground-breaking event.

“We’ve been planning this for quite some time and I’m excited to see it start,” Library Director Jessica Keyser said.

Working on the GPPL’s strategic plan, Keyser explained, “led to the realization we needed to do a space needs and capital needs assessment. We began working with an architect and Plante Moran Cresa to evaluate the state of the buildings, and having conversations with the community and the staff and with key stakeholders of the library to determine our needs, now and in the future.”

The GPPL’s Central branch was built in 1952, Ewald branch in 2004 and Woods branch in 2006. Each was evaluated in terms of function, activity, relationship, size and adjacencies that support and energize the spaces at each site, according to the capital planning assessment.

Phase 1 will address critical needs at each site, Keyser said. 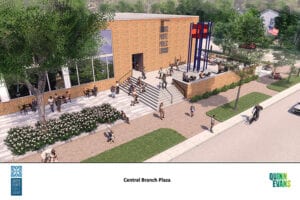 The outdoor area at Central will include seating, new landscaping and handicap accessibility.

At Central, the outdoor space along Kercheval will be renovated and improved. An existing cement patio will be restored and a larger patio — with outdoor seating, Wi-Fi access and the ability to host outdoor programming — will be added, Keyser said.

“At Ewald, we’re doing a refresh of the interior,” she added. “We’ll change the layout. For example, we’ll merge the circulation and reference desk together to make one central service point.”

Additionally, noise-absorbing features will be added to mitigate sound traveling through the building and improve acoustics.

The Woods branch will receive improved lighting at the front entryway 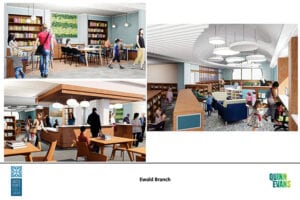 and a safety issue with the main floating staircase will be addressed.

“And we’re adding a new entrance on the Mack side of the building,” Keyser said. “We have parking available on Mack in front of Parcells (Middle School). … A lot of people don’t realize that. This will make it a more direct entry point.”

The total budget for Phase 1 carries a price tag of approximately $2 million, funded by capital reserves and donations. 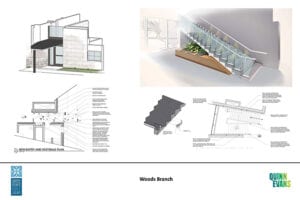 Rendering courtesy of Quinn Evans
Changes to the Woods branch include fixing the main floating staircase and adding an entryway on Mack.

Quinn Evans Architects is the project architect and McCarthy & Smith is the construction manager.

While the Central and Woods branches will be operational during construction, Ewald will be completely closed while the interior is under construction. Staff from Ewald will be reassigned to the other two branches during that time, Keyser said.

This project marks the first renovations for Ewald and Woods.

“They’re both around 15 years old, so they’re due,” Keyser added, noting Central had some work done in 2016, including getting new carpet in the main reading room, but nothing was done to its exterior.

Keyser said while initially plans included moving right into Phase 2 — the enhanced phase — once Phase 1 is completed, the arrival of COVID-19 forced a pause to the strategy.

“We want to see what the economic impact of COVID amounts to” after Phase 1, Keyser said.

However, when the time comes, Phase 2 plans could include an addition to Central to allow for more children’s space, installation of an elevator to make the second floor more accessible and updating restrooms to make them compliant with the Americans with Disabilities Act. 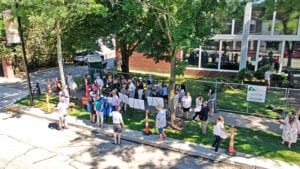 In the meantime, Keyser said she’s thrilled to be moving ahead with Phase 1 improvements.

“We had no idea what would happen with the coronavirus in 2020 when we were making these plans,” she added, noting the open-air additions at Central will be a benefit to patrons in light of the health crisis.

Keyser expressed gratitude to the community, Grosse Pointe Library Foundation and the Ralph C. Wilson Jr. Foundation for their support.

“I’m grateful for all of the support and excited to become even better in the future,” she said.

“I think all three buildings will have a heightened level of function and will be even more beautiful for the community. I’m excited to see these plans come to fruition. I look forward to having a ribbon-cutting ceremony … and sitting in the late summer sunshine outside at Central.”